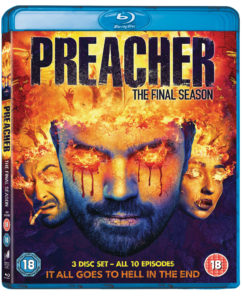 This series of Preacher continues to follow the misadventures of Jesse Custer (Dominic Cooper, TV’s “Agent Carter,” Captain America: The First Avenger), a small-town preacher with a criminal past who sets out to find God, only to discover he is absent from Heaven. On a long journey to reach the Most High, Jesse is joined by his ex-girlfriend Tulip (Academy Award* nominee Ruth Negga, Best Actress, Loving, 2017, TV’s “Agents of S.H.I.E.L.D.”) and his best mate Cassidy (Joseph Gilgun, This is England, TV’s “Emmerdale”), an Irish vampire. But as God’s great design for the universe plays out, their search to find him will involve them in a twisted battle that will take them to the ends of the Earth and far beyond…

As our story inches closer to the finale, God’s endgame for the universe begins to click into place. Trapped between heavenly prophecies, hellish prisons, and all-out nuclear war, Jesse, Tulip, and Cassidy make their bloody way to the Most High. Whether they can reach God in time — or whether all this carnage is part of His divine plan — will soon be revealed as Preacher barrels towards the end of the world.